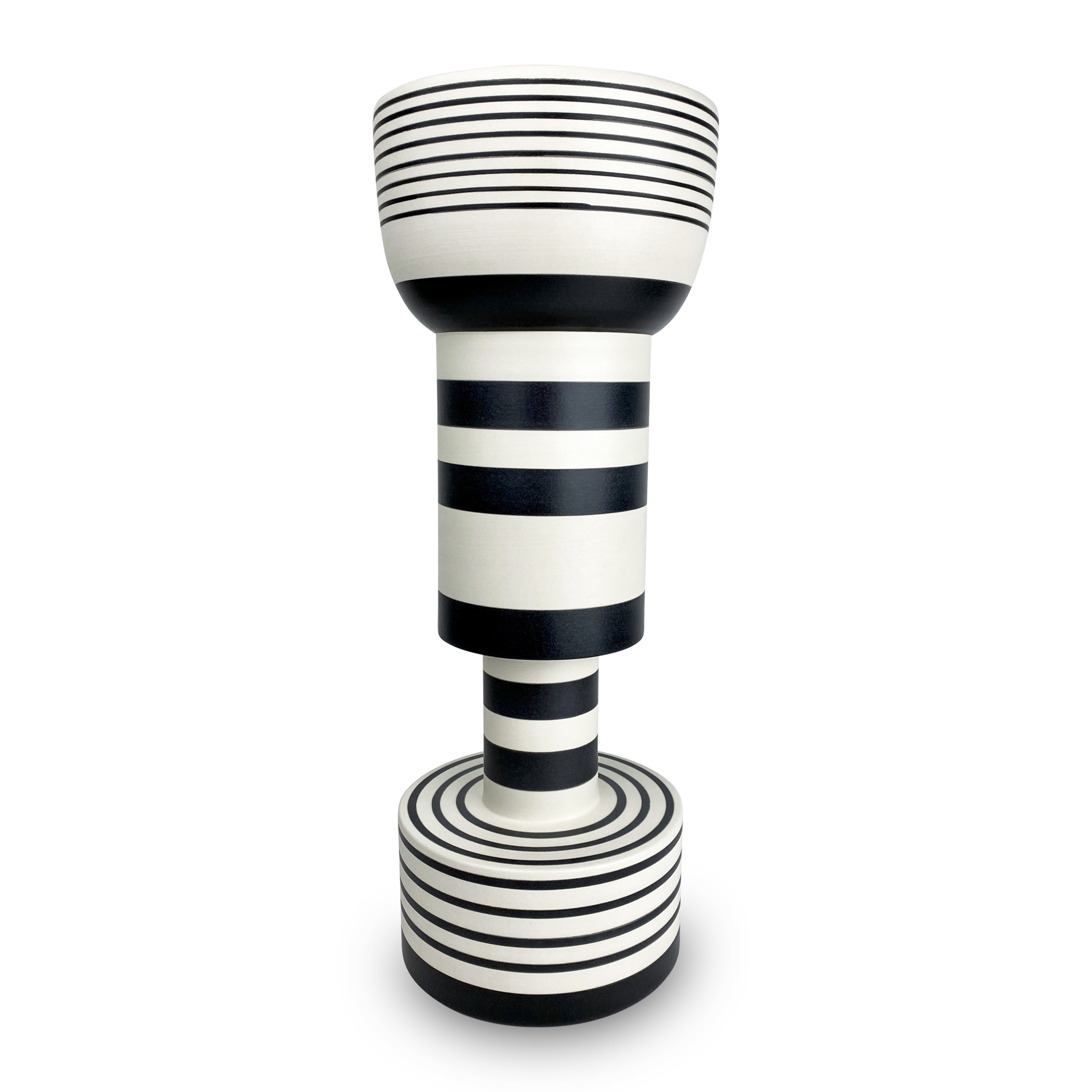 Ettore Sottsass (1917–2007) is most often associated with his iconic red Olivetti Valentine typewriter from the 1960s and founding the Postmodern Milan-based Memphis Group in the 1980s. He created this timeless piece for renowned manufacturer Bitossi. Made in Tuscany using the company’s time-honored techniques in ceramic production, the black and white Calice [Chalice] vase bears its designer’s signature bold colors, graphic contrasts and geometric shapes. 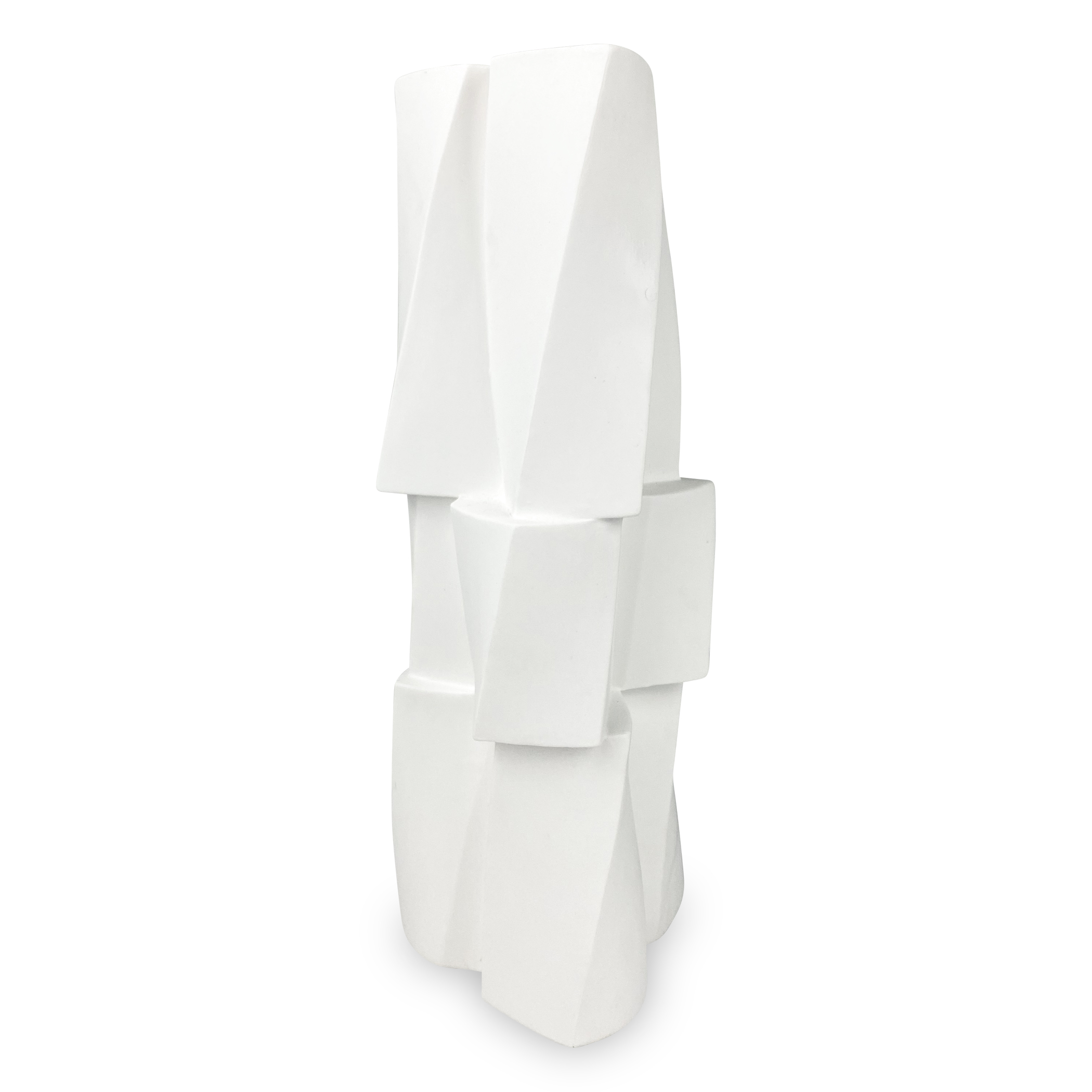 Of the six "lines" Frank Gehry created for Tiffany & Co. [Fish, Orchid, Fold, Equus, Axis, and Torque], Torque was perhaps the most directly related to his architecture – this Torque vase a tabletop version of Gehry's InterActiveCorp [IAC] headquarters in Manhattan. Because Gehry's relationship with Tiffany & Co. lasted a short 3 years and there were only a handful of tabletop items [along with 100s of jewelry designs], these pieces have rightly reached cult status. 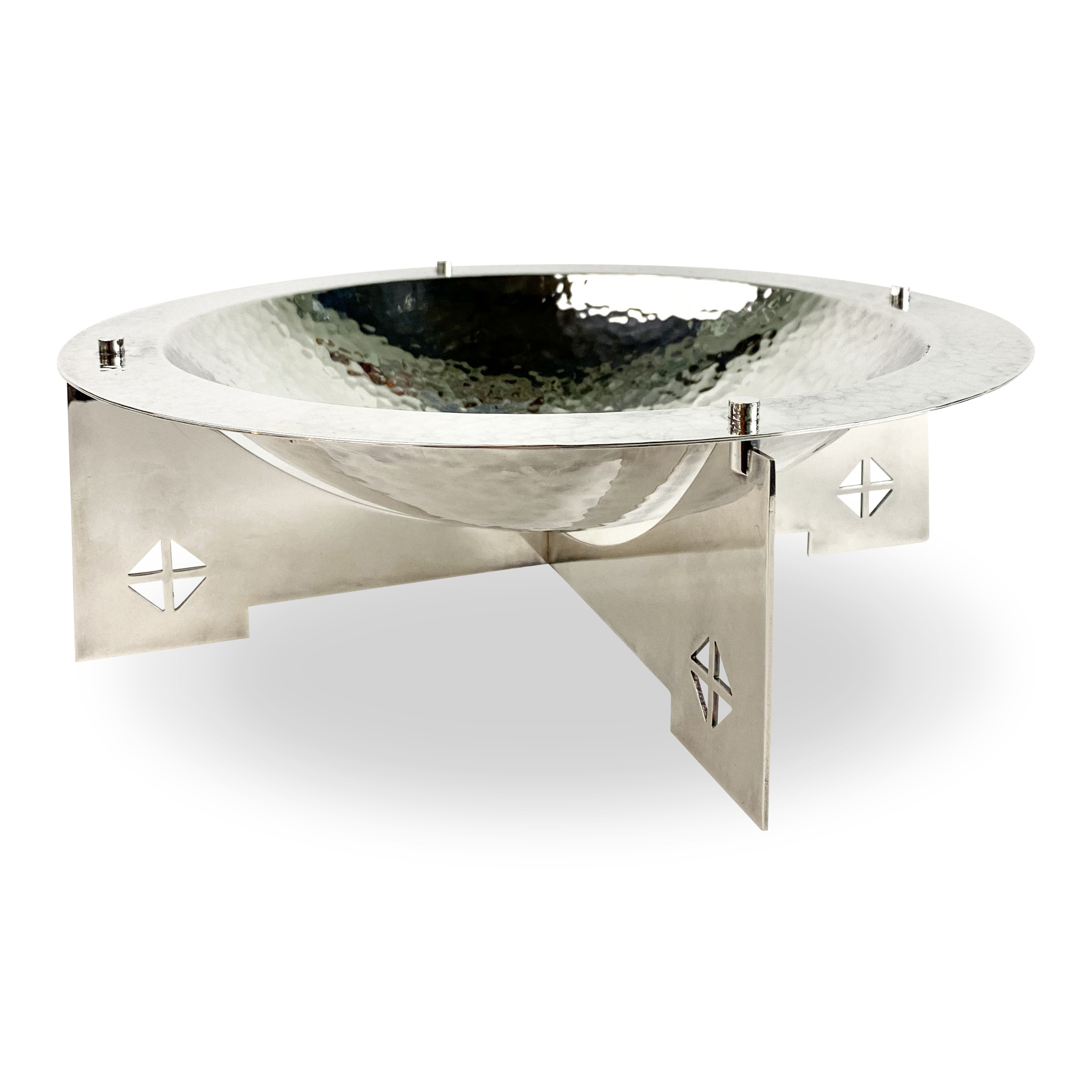 Gwathmey explained, this design – a hammered bowl bolted to a cross base – “has to do with the holder and the held, the frame and the object…creating a third ingredient; how the pieces come together.” It also seems a modern interpretation of arts & crafts design. Swid Powell commissioned celebrated architects and designers to create tableware in the 1980s and 1990s. 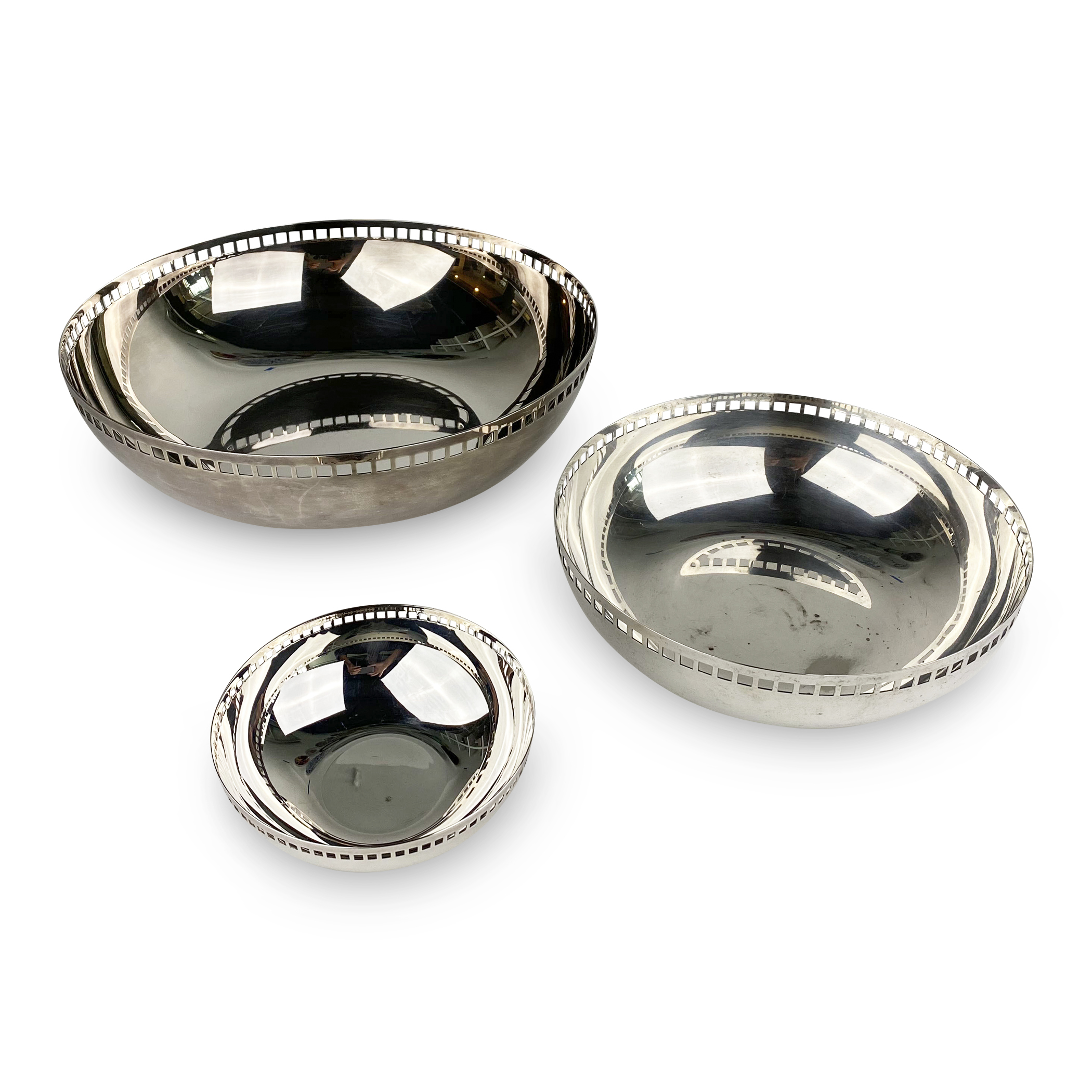 The Meier bowl’s spare decoration, a rim of pierced squares, reflects Meier’s commitment to the Modernist grid in all his commissions large and small. It also recalls the early 20th century designs of both Joseph Hoffman and Charles Rennie Mackintosh. This is the largest version of the 3 sizes produced – 6", 10" and 14" diameters.

This design was originally named "King Richard Bowl" when introduced in 1984. Due to a challenge, the name was changed to "Meier Fruit Bowl" or "Meier Bowl". It is often referred to as "Skyscraper Bowl," a name that is neither documented nor describes the form. 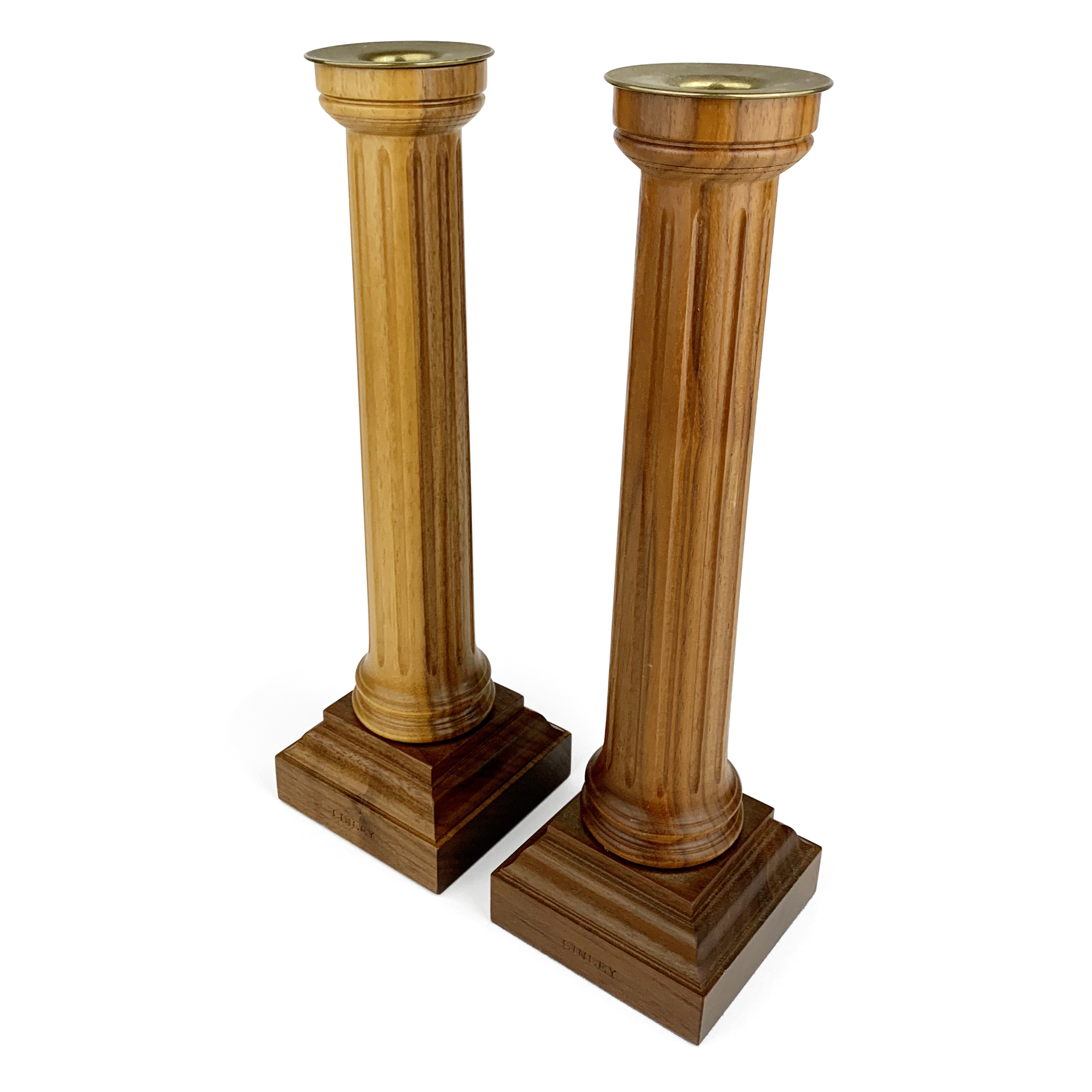 David Linley, son of Princess Margaret and Anthony-Armstrong Jones, began his bespoke furniture Company in 1985. These fluted column candlesticks with stepped square bases stamped LINLEY from the 1990s are reminiscent of souvenirs of the Grand Tour. They are also an example of the the long English tradition of incorporating architectural elements into furniture and decorative objects – evident in many of Linley's pieces from the 1990s. 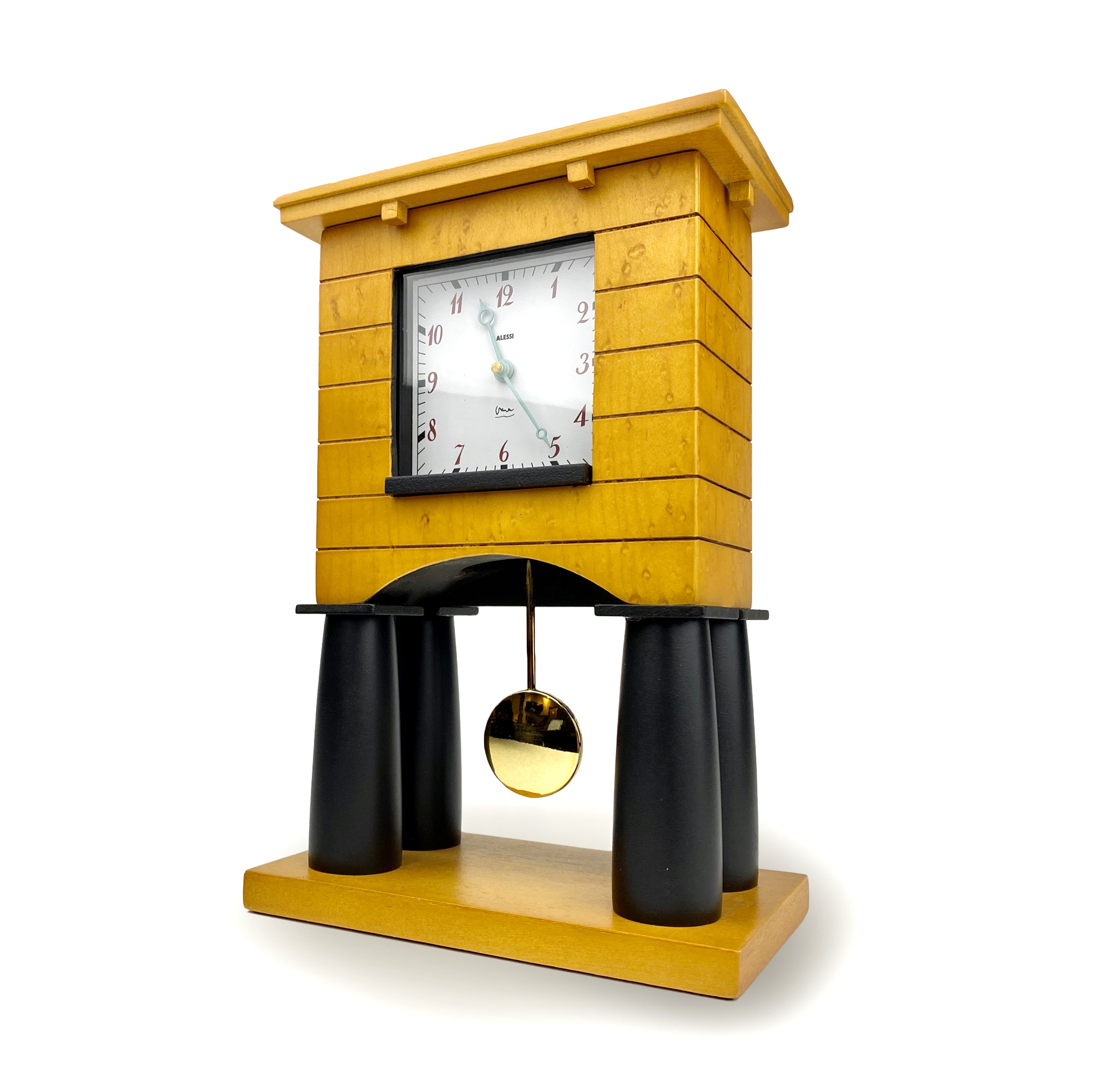 “In designing the table clock, I was interested in exploring the well-established tradition of seeing artifacts as miniature architecture.” Michael Graves

Michael Graves was a noted American architect and designer of consumer products. As well as principal of Michael Graves and Associates and Michael Graves Design Group, he was of a member of The New York Five and the Memphis Group and professor of architecture at Princeton University for nearly forty years. He was recognized as a major influence on architectural movements including New Urbanism, New Classical Architecture and particularly Postmodernism and was one of the most prominent and prolific American architects of the latter 20th century. He designed more than 350 buildings around the world but was perhaps best known for a teakettle. 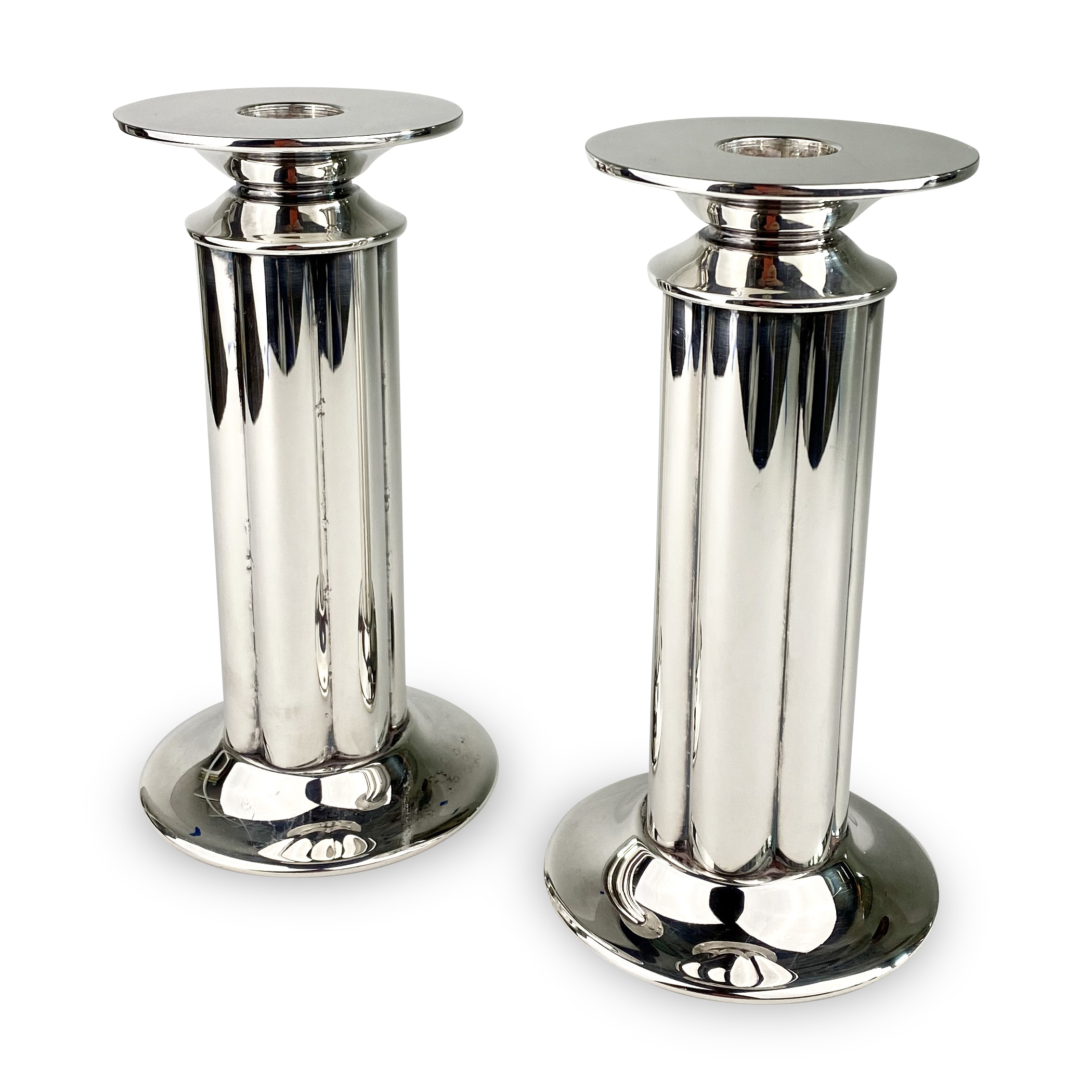 Robert AM Stern, the Modern Traditionalist architect, is well known for his muscular take on classic American architectural idioms. Think steroidal new “pre-war” towers for billionaires in Manhattan or 10,000 square foot shingled “cottages” in the Hamptons. At a little more than a half a foot, these sturdy fluted columns, designed for Swid Powell in the mid-1980s, are the perfect tabletop expression of his expansive architecture that one can enjoy with considerably less space or money. 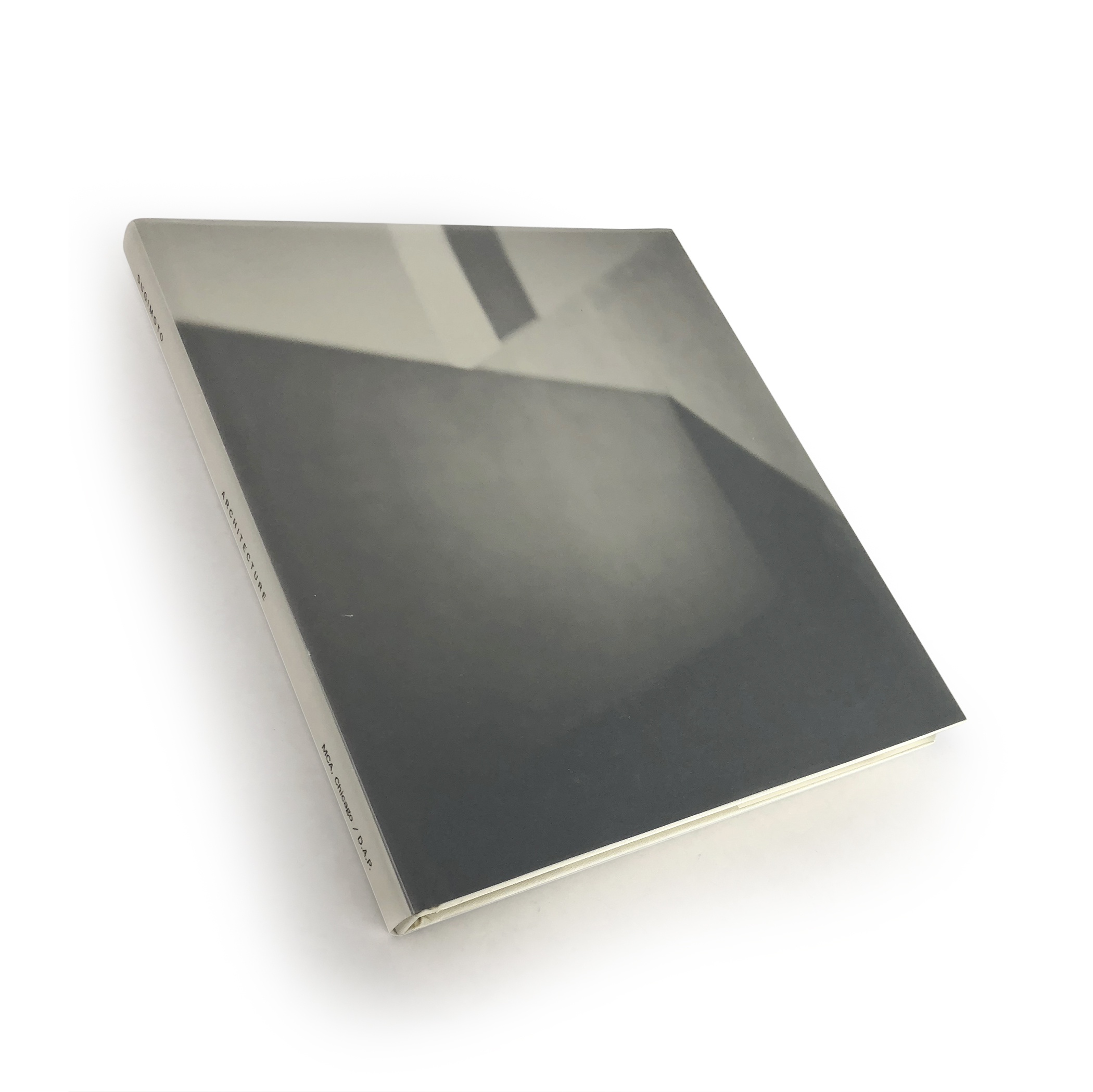 Known for his long-exposure photographic series of empty movie theaters and drive-ins, seascapes, museum dioramas, and waxworks, Hiroshi Sugimoto has been turning his camera on international icons of twentieth-century architecture since 1997. His deliberately blurred and seemingly timeless photographs depict structures as diverse as the Empire State Building, Le Corbusier's Chapel de Nütre Dame du Haut, and Tadao Ando's Church of Light in Osaka.

The resulting black-and-white photographs, shot distinctly out of focus and from unusual angles, are not attempts at documentation but rather evocation. Like the theatres or seascapes, the buildings are isolated from their contexts, allowing them to exist as dreamlike, uninhabited ideals. 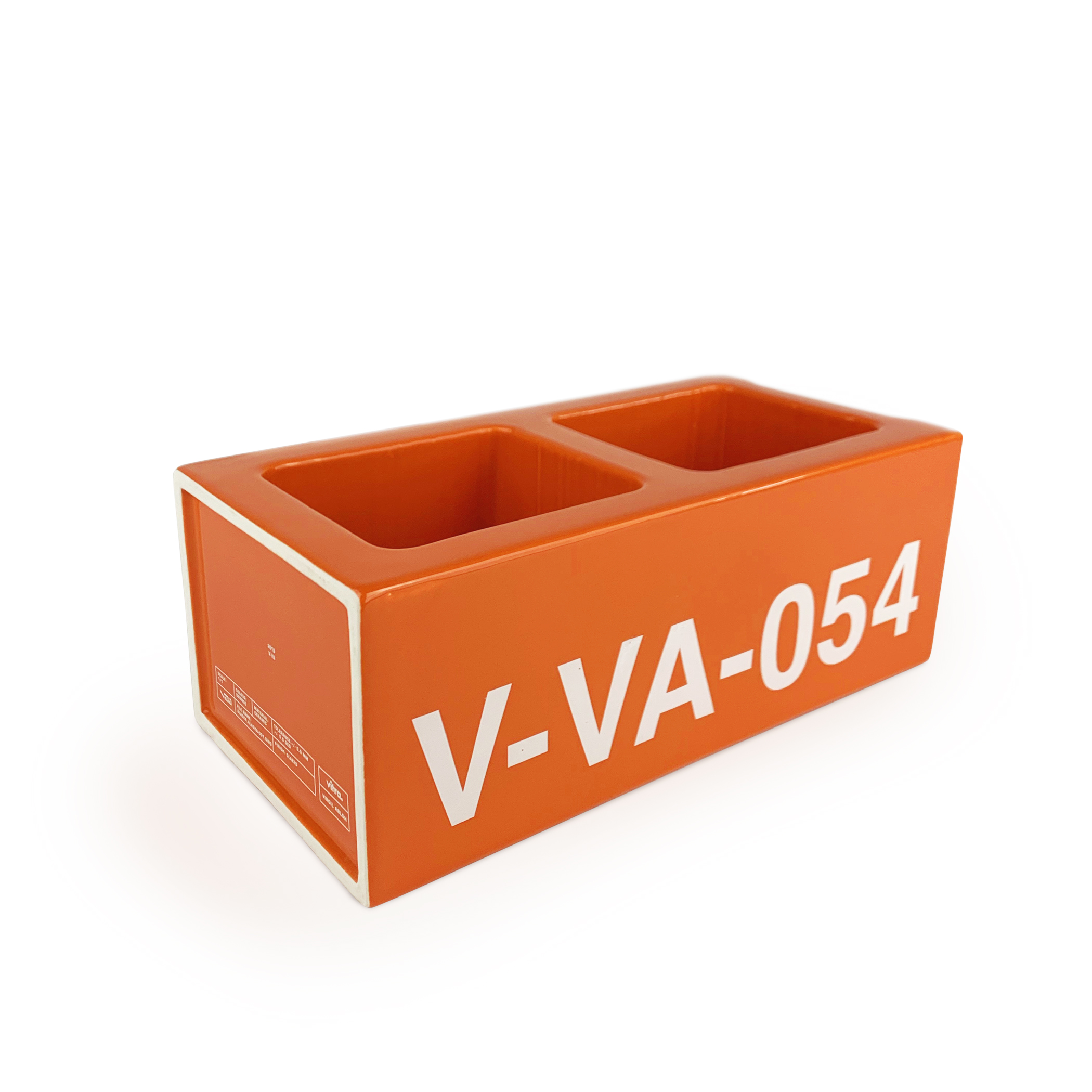 In June, 2019, Virgil Abloh, designer of both Off-White and Louis Vuitton’s Menswear, created an art installation and three limited-edition home design products with design company Vitra in conjunction with Art Basel. The most conceptual piece was the Ceramic Block wall. Abloh and Vitra developed 999 ceramic orange bricks, each of which are numbered and together formed a structural element of the “TWENTYTHIRTYFIVE” exhibition. Like much of Abloh’s oeuvre, the ceramic block is labeled in an almost scientific way, with the typography an important design element and no two alike. 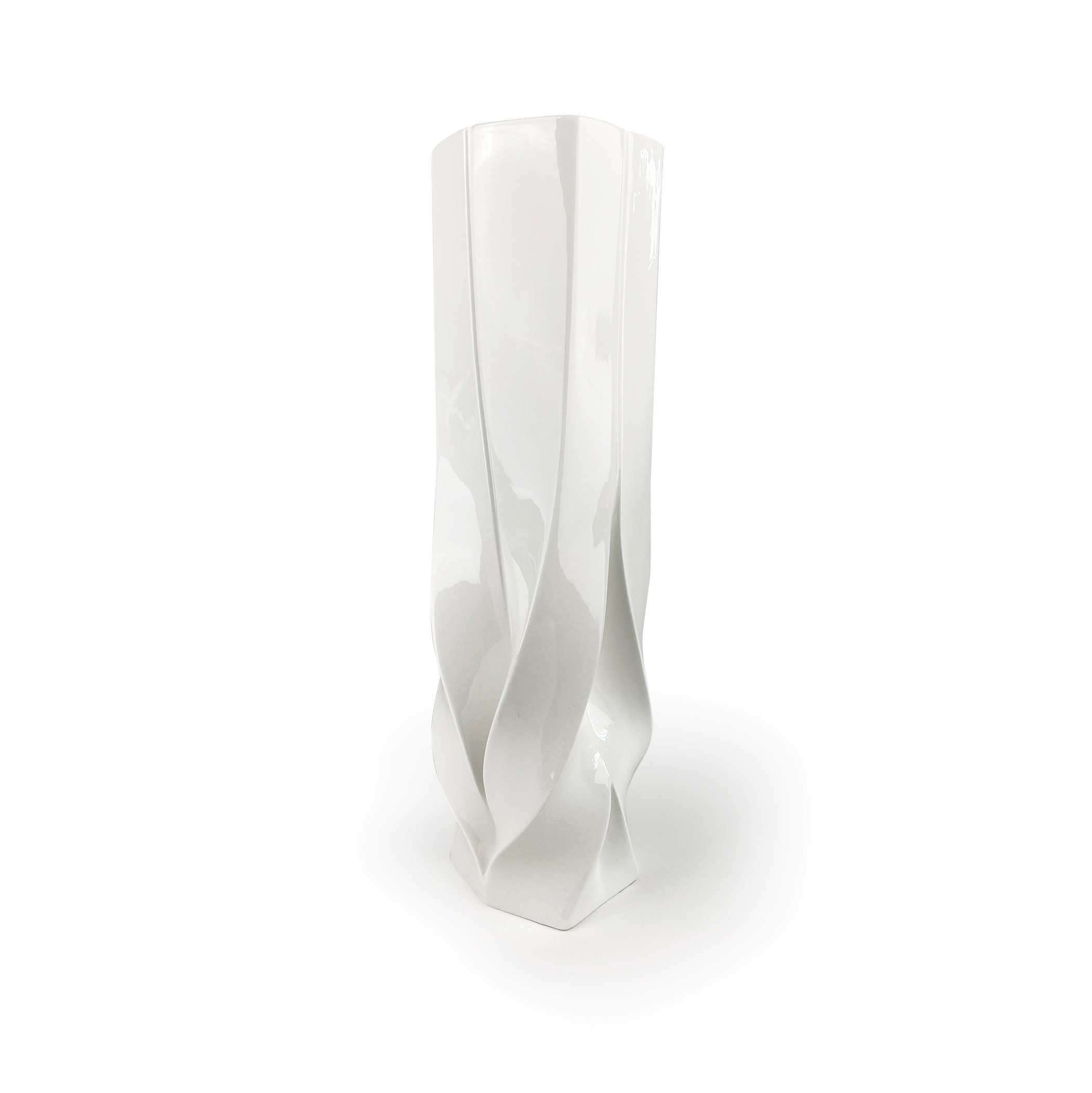 Dame Zaha Mohammad Hadid DBE RA [ 31 October 1950 – 31 March 2016] was a British Iraqi architect described as the “Queen of the Curve” by The Guardian of London. The Guardian went on to say that Hadid ‘liberated architectural geometry, giving it a whole new expressive identity.” From the Guangzhou Opera House to the MAXXI in Rome and to the Port Authority Building in Antwerp, her designs often thrust skyward, defying convention.

Hadid began developing a number of projects including a 70-piece homeware collection. Dubbed simply Collection 2016, it was unveiled at the Maison & Objet show in Paris. The collection featured vases, candles, and tableware conceived by the architect and realized by her firm after her death.

Her Braid vase, crafted from fine bone china, is perhaps the most literal reference to Hadid’s legacy, rising like a skyscraper with an interlaced base. No longer in production, this vase is a tabletop example of Hadid’s towering artistry.